ALL SHOOK UP this weekend!

The Off Broad Street Players Theatre Company proudly presents "ALL SHOOK UP" an Elvis-inspired musical, Friday & Saturday at 8pm and Sunday at 3pm. Tickets are $15 for Adults and $13 for Students and Seniors. A family night performance will be featured on Thursday at 7:30pm for $7 general admission. All performances are held in the Robert L. Sharp auditorium at Bridgeton High School.

This show set in a square town in a square state during a square decade. Here a lonely young girl, Natalie Haller, dreams of hitting the open road. Into her life rides a guitar playing roust-about by the name of Chad who changes everything and kick starts a hip swivelin, lip curlin’ adventure that will have audiences jumpin’ out of their blue suede shoes. The score features such Elvis hit classics as “Heartbreak Hotel,” “Burning Love,” “Jailhouse Rock” and more.

ALL SHOOK UP stars Andrew Jarema as Chad and Katlin Cox as Natalie Haller. Jarema, a Rowan student, has most notably been seen on the OBSP stage as the Scarecrow in THE WIZARD OF OZ, and as John the Beloved in JESUS CHRIST SUPERSTAR. He has also been featured in productions of SOUTH PACIFIC and HELLO, DOLLY!. Cox has been featured on the OBSP stage most recently as Mary Magdeline in JESUS CHRIST SUPERSTAR, and has appeared in productions of THE SECRET GARDEN, FOOTLOOSE, and SOUTH PACIFIC (to name a few). Starring as Natalie's father Jim, is Lee Cox (Kaitlin Cox's real-life father). He has most recently been seen as playing Judas in JESUS CHRIST SUPERSTAR and Luther Billis in SOUTH PACIIC.

--No review will be posted of this show considering I have a small cameo role and also I am featured in the ensemble.
--Our Assistant Stage Manager snapped a picture of me backstage in costume. I play a small walk-on role as a bus driver. For my character development, I've resurrected a "nerdy" character I played during SOUTH PACIFIC (the Professor) and made him the new ALL SHOOK UP bus driver. Picture is below. 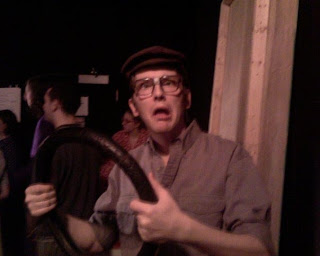