Originality on the Rialto!

AND JUSTICE FOR ALL
South Camden Theatre Company
Waterfront South Theatre, 400 Jasper St. Camden, NJ. 08104
Box Office: (856) 456-2850
Opens this FRIDAY at 8pm!
This show, a festival of five one-act plays, tackles issues surrounding the American justice system and certain injustices we face.
According to their website, The five one-act plays have been selected from sixty-four plays that were submitted in an International call for scripts. SCTC has already tackled the Iraq War and nontraditional prejudice in past festivals and now shines its light on this complex and engaging subject.
Performances:
April 24, 25, May 1, 2, 8, 9 at 8pm
April 26 May 3, 10 at 1:30pm
Directed by: Christopher Shimpf, Tom Jaurez, Connie Norwood, Ray Croce, and Brad Reiter.
And if I could just say this: there are many fun musicals and plays popping up all over South Jersey and I am delighted to see them all, however, I think there is a very strong need for theatre companies like SCTC that provide cutting-edge material, and a breath of originality on the South Jersey Rialto. I urge all theatre patrons to support the South Camden Theatre, it helps support our playwrights and Camden County arts district.
Posted by Jim Cook Jr. at 2:47:00 PM No comments:

I Could Have Danced All Night! 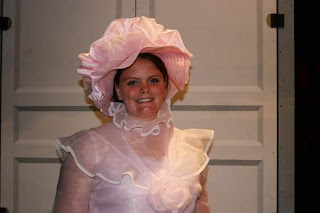 (photo: The Daily Journal)
MY FAIR LADY opens TONIGHT!
Millville High School, 200 N. Wade Blvd, Millville, NJ. 08332.
Starring KAITLYN COX as Eliza Doolittle. A member of the Off Broad Street Players Theatre Company in Bridgeton, Kaitlyn has been most recently and notably starred as Natalie in All Shook Up and as Mary Magdeline in Jesus Christ Superstar.
April 23, 24 25 at 7:30pm
April 25 at 2:00pm
Tickets are $8.00 Adults
$6.00 Students/Seniors
Also features OBSP members Kelsey Vizzard and Raven Stewart.
Posted by Jim Cook Jr. at 2:26:00 PM No comments:

Any Shakespeare Will Do A Midsummer Nights Musical - Ritz Theatre Co. A completely original musical written for the Ritz Theatre Company opens this Friday, April 24 @ 8pm. Performances run this weekend, and throughout the month of May, Friday & Saturday nights at 8pm, Sunday matinees at 2pm, and Wednesdays (5/6 & 5/20) at 7:30pm. 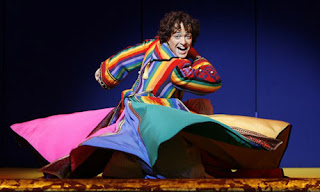 (Lee Mead in the new West End production of Joseph at the Adephi Theatre in London. Mead won the role in a London reality T.V. show Any Dream Will Do)
JOSEPH AND THE AMAZING TECHNICOLOR DREAMCOAT - Haddonfield Plays and Players - Opens Friday May 1st@ 8pm. Tickets are $19. Performances run every Friday & Saturday @ 8pm and Sunday @ 2pm until May 16th. Check out their new website (it's totally cool!)
Posted by Jim Cook Jr. at 1:10:00 PM No comments:

Sometimes, one of the biggest faults in not being able to attend the theatre is not having proper directions. With the "spring play" season approaching (meaning many theatres will be premiering non-musicals) and "Summer mainstages" (meaning full-scale summer musical staging) it is vital to know where to go. Each blue pointer on the map, if clicked, will give a description of the name of the theatre, it's address, and directions to and from.
If all it takes is driving directions, you can plan your entire trip with this simple interactive map below. ALSO, when the map is filed after I post more, you can still easily access this by checking the sidebar. Also, check the sidebar for links to all your favorite theatres in South Jersey. ;)

I was just clicking around and I noticed that Haddonfield Plays and Players completely revamped their website. Click on the link I've provided or check out their link on my sidebar. Their new interactive site was a much needed improvement. Bravo!
Posted by Jim Cook Jr. at 7:49:00 AM No comments:

Went to see The Children's Hour last weekend and I thought it was a good show. I had some problems with character choices and thought maybe if the cast had another week they could have been a bit more solid. I LOVED the set and the lighting. Kudos to the crew. But overall, the show was fantastic. Story in a nutshell: little girl goes to an all-girl's school and runs away to her grandmother's house. From preventing her grandmother to send her back, she decides to lie, saying the two headmistresses were having a lesbian affair. Keep an eye out for more in The Whit. There were a few points I wasn't allowed to include due to spoiler details, but I've listed them below. Check it out below -->
-----


In the end, Dobie admits to being a lesbian and being in love with Wright. Was there any interaction between the two of them that prompted her admitting this? And what makes Wright so certain that she wants to be married to Dr. Cardin?

Also, for a young girl, Mary had quite an imagination, especially to devise this accusation while attending an all-girls school during the 1930s when the idea of homosexuality was closely guarded away from schools and children. It’s also strange how Dr. Cardin never felt completely certain that the accusation was false. Or perhaps I’m completely looking too far into it.
Posted by Jim Cook Jr. at 5:47:00 PM No comments:

Here's my newest beef, then turn-around.
Everyone is going googly eyes over this new guy on American Idol: Adam Lambert. (And by everyone I mean, teenage girls, but the world only revolves around them right?) Anyway, I heard he was making a wild tear of genius on our all-time favorite lack-of-talent reality T.V. show. So, I got all excited because I figured here was someone I couldn't out-sing, (considering I could probably leave every male performer from the past three seasons, save for David Cook, in the vocal dust...and I'm not being egotistical.) Excitedly in a fury I research Lambert to only find out that he's been in the chorus of the Broadway company of WICKED. Now I'm really mad because he's technically been paid as a professional performer and should have to starve like the rest of us (not that I'm professional, but he gets paid way more than I do.)
Then I found this sound recording of him singing "Come To Me Bend To Me" from the Learner and Lowe musical Brigadoon from when he was 22 years old. (He's about 26 or 27 now)

AND NOW I LOVE ADAM LAMBERT!!!!!!!!! I really really really really really really hope he wins American Idol. He seriously is the best male talent they've ever had on that show. In fact, Simon Cowell gave Lambert a standing ovation after his rendition of "Mad World" last week.
Who cares if he had that crappy little bit-role in WICKED. Its not even that great of a show anyway.
GO BROADWAY!!!
and GO ADAM....us theatuhh junkies gotcha back son!
Posted by Jim Cook Jr. at 3:54:00 AM No comments:

The hour is approaching.... 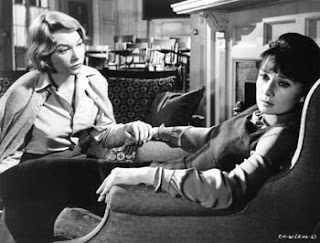 Image from the movie THE CHILDREN'S HOUR starring Audrey Hepburn.
Rowan's Theatre Department is staging a new production of THE CHILDREN'S HOUR by Lillian Helman. Hellman, an outspoken political activist and women's rights advocate wrote this play in the 1930s to challenge social norms of the day. The story follows a young girls school where two students accuse two teachers of being in a homosexual relationship. Hellman also revived the play 20 years later to a record-breaking and audience-challenging run of Broadway.
April 16, 17, 18 @ 8pm
19 @ 2pm
The production is directed by Dr. Elisabeth Hostetter* and features professional actress Allison Green. Tickets are $10 for Adults and $5 for Students/Seniors. Free admission is granted to all Rowan students with identification.
(published Friday afternoon)
(*correction made Monday morning to the name Hostetter (spelling) and the dates of the show. I apologize!)
Posted by Jim Cook Jr. at 6:01:00 PM No comments: 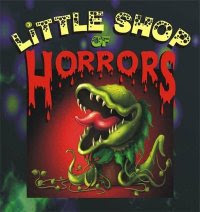 Where to find the tutorial

heres a little diddy if you're a blogger and need to learn HTML...i gotta learn...so....

This past Wednesday night, Levoy Theatre (Millville, NJ) Board Chairwoman Lauren Van Embden, 29, invited me to her home for an exclusive interview about her involvement with the renovations, restoration, and revitalization efforts to re-open Millville's historic 100 year old theatre: the Levoy. We chatted about how she came to join the Board of Directors, her plan, what's to come in the future. We even had few special surprise guests.


and this is just for your sheer enjoyment....

By the light of the drapes!

I went to see Neil Simon's Fools last night in the Lab Theatre at Rowan University
It was so much FUN!!!!! Went with Andrew and his friends Dominic and Amanda, all of whom loved the show! Direction by Michael Pliskin was absolutely hilarious and the sets were so innovative, using painted flats and mime-like actors as part of the set itself. Set direction was done by Matthew Wagner, 21, Theatre tech major at Rowan, who has work on mainstage shows such as Towers, Our Country's Good and last season's Spring Awakening. Wagner has also stage managed Anything Goes and Beauty and the Beast at Audubon High School. We're all sure to see more of his work for the upcoming mainstage play The Children's Hour, and soon on regional stages in South Jersey.
Great show!
Posted by Jim Cook Jr. at 1:25:00 PM No comments: 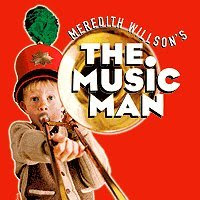 Real quick post. haha.
Probably one of my favorites, if not my all time favorite show is Meredith Wilson's The Music Man. Two times I've had the opportunity to be in this show.
It's opening this weekend at Cumberland Regional High School
April 2, 3, 4 @ 7pm and an additional matinee at 1pm on April 4th.
Tickets are $7 and can be purchased at the door.
Come see this great show!
Posted by Jim Cook Jr. at 8:21:00 AM No comments: 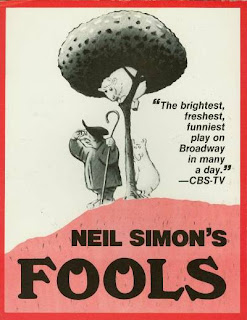 Once upon a time there was a playwright named Neil Simon...he's probably my favorite. My first experience with Neil Simon began in May of 2006 when I was cast in his play Broadway Bound. That play is the third in his hailed psuedo-memoir Brighton Beach Trilogy. These shows are all absolutely beautiful, funny, heartwarming with a mix of true life experiences. I remember some audiences members having to leave the theatre after one scene in which my mother and father had a 12 page dramatic dialogue in which their relationship fails. Comedy you ask? Those plays hit a little bit closer to home.
My second experience with Neil Simon was when I assistant stage managed a production of Barefoot in the Park. This show was a bit more witty and frivolously fun. True Neil Simon style.
Tomorrow night at 8pm in the Lab Theatre at Rowan University, a very Neil Simon-esque Neil Simon play, Fools, will open. Tickets are only $1 and are a mere donation to the theatre company. I hope to be there tomorrow night. I think I'll be meeting my friend Andrew there and he plans on bringing some friends out, which is great because we need to give the student-produced theatre productions our utmost support.
The production is directed by Michael Pliskin '10 and the production is designed by Matthew Wagner '10
Posted by Jim Cook Jr. at 2:10:00 PM No comments: