OBSP's "OKLAHOMA!" TO TRANSFER THIS WEEKEND!!!!! 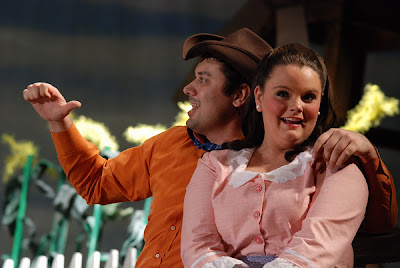 DON FRANSKO (Curly) and KATIE COX (Laurey) in a scene from OKLAHOMA!

The Off Broad Street Players Theatre Company of Bridgeton is transferring it’s production of the classic musical “Oklahoma!” to Lower Cape May Regional High School on January 9 at 7pm and 10 at 3pm. Tickets are $15 for adults and $13 for students and seniors.

This production originally opened in November at Bridgeton High School, when the group was approached with an opportunity to bring their production to a new audience.

This classic Rodgers and Hammerstein musical follows the young ranch hand Curly (Don Fransko, Vineland) who is in love with Laurey Williams (Katie Cox, Millville). They are much too proud to admit they love each other, resulting in Laurey accepting an invitation to the local dance by the shadowy Jud Fry (Richard Smith, Bridgeton)

Meanwhile, raucous cowboy Will Parker (Andrew Jarema, Pittsgrove) has just returned from his trip to Kansas City. His girlfriend, Ado Annie (Stephanie Bello, Elmer), unfortunately, is a girl who just can’t seem to say no to other men. Thus, the ever-classic story unfolds with a rich score featuring such songs as “O What a Beautiful Morning,” “People Will Say We’re In Love,” “Kansas City,” “Many a New Day,” and the title number “Oklahoma!” 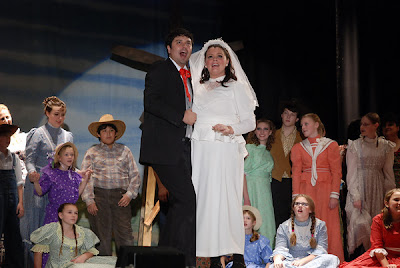