Jim is busting out all over!!!! 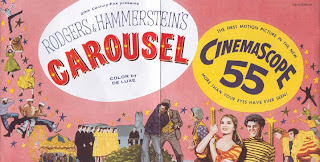 I am absolutely ecstatic! Waking up this morning I noticed there was snow all over my world and a plethora of messages telling me not to go to Rowan University for class today. Also, checking in with our neighbors, all broadway shows are scheduled to perform according to an article posted this morning on Broadwayworld.com. So, if the roads clear up, maybe I should trek up to Times Square and go see something.

But the big news that somehow I'm just now stumbling upon is that Fox Pictures has acquired the production rights to Rogers and Hammerstein's Carousel starring Hugh Jackman as Billy Bigelow, which is damn fine by me! Of course I sent out my usual text messages to show my blissful happiness over this news. Why am I so excited? This was my first musical I performed in community theatre and it's very dear to me, as well as very dear to those around me. Time Magazine named Carousel the BEST musical of the 20th century, and Richard Rogers claimed this work as his favorite of all his musicals.


Carousel follows the story of Billy Bigelow, a carousel barker, and his love for the mill-worker Julie Jordan. Both losing their jobs for seeing each other, they fall in love. Penniless, they live with Julie's aunt Nettie Fowler. Julie suddenly discovers she is pregnant and Billy teams with hoodlum friend Jigger Craigin to rob a ship for money. Billy dreams of having enough money to provide the best he can as a father for his daughter. The course of the robbery goes terribly wrong and Billy stabs himself. He then finds himself in a purgatory where he is given one chance to return to Earth for one day to see his daughter.
The score includes such favorites as June is Bustin Out All Over, If I Loved You, and the famed You'll Never Walk Alone.

"BILLY: On a night like
this I start to wonder
What life is all about.

JULIE: You were right about
there bein' no wind.
The blossoms are comin'
down by theirselves.
Just they're in time to, I reckon."
-from "If I Loved You"
CAROUSEL
Posted by Jim Cook Jr. at 2:55:00 PM