Liberation in the Pit! 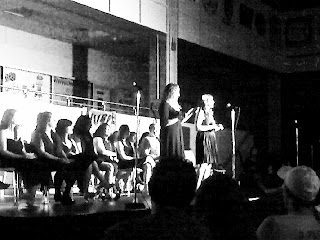 What a great time I had Monday night in the Student Center Pit while various women entertained me with great skill....talking about their vaginas.
Vaginas? Yes. "The Vagina Monologues" had it's second annual run at Rowan University last night. Written by Eve Ensler and directed by Kristen Brozina, the play tells true-stories taken from real women from all walks of life. Topics included sexuality, pleasure, masturbation, homosexuality. And ranged to some darker topics such as rape, sodomy, and sex crimes in Congo and Bosnia.
The event, sponsored by the Venue Magazine, donated all proceeds to the Camden County Women's Shelter.
"It allows women to be completely open," said Kristen Brozina, 20, Millville. Brozina, a junior at Rowan University, directed the special event for the second year in a row and participated in the monologues herself. “It really is groundbreaking,” she said.

The young female performers displayed wide ranges of emotions while breaking barriers of dialogue many audience members had not yet seen on a stage. The actresses were not limited to the sole theatre department, in fact, many of them were from various majors and walks of life: Biology, Journalism, Psychology, as well as a mother, first-generations Americans, an EMT to name a few.

Rebekah Macchione, 20, Rowan Junior theatre major, proceeded through each letter of the word and how it made her feel and how the word came together in harmony. After the monologue, she proceeded to gain audience participation, all chanting “C--T!” an action one normally never hears in public, let alone chants.

But not all monologues were geared towards these experiences. A large portion raised awareness about various parts of the world where women are sodomized and raped through horrific sex crimes. Women from Bosnia and Congo were represented on the stage in emotionally charged moments of dialogue.

Women in need of help, shelter, advice should call the Camden County New Jersey Coalition for Battered Women at (201) 336-7575. Their hotline is open 24 hours a day.

If you are a

show person, and would like to have your group or event featured on the South Jersey Rialto, please e-mail me (Jim Cook, Jr.) at jimcookjr06@gmail.com